Just last month I launched the zine collection at Tate. After 5 years of collecting and cataloguing zines, we were finally able to bring zines out of the artists' books collection and treat them as zines. The launch was a way of celebrating the work this has taken over the last 5 years with a display of some of the zines collected and a talk by the amazing Soofiya. But it was also a way to think about the future ethics and responsibilities of the library's engagement with zines and diy culture, making sure we don't treat zines as just art objects which Look Nice, but as living breathing documents representing radical ideas, art, and people. 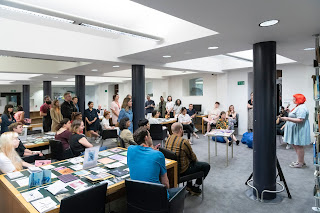 Around the time of the launch I was contacted by Beatrix Pang, member of Zine Coop, one of the zine groups we met while in Hong Kong where I was beyond lucky to be part of a zine residency with Nicola Cook and Loesja Vigour and Asia Art Archive. During this visit we met with activists, artists, zine makers, and librarians, discussing zines as more than art objects, but as vital tools of activism. 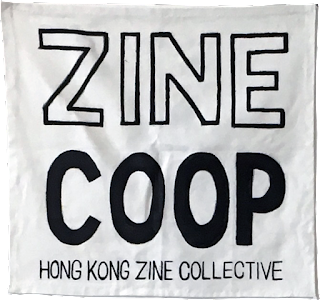 Zine Coop were reaching out to international zinesters, librarians, galleries, and organisations to create a space and to lift the voices of Hong Kongers involved in the anti-extradition bill protest movement. Zine Coop had created and collected zines and printed works from the protest movement, sharing encouragement, and messages of hope, as well as information and resources for organising protests, and remedies for  tear gas and rubber bullets. 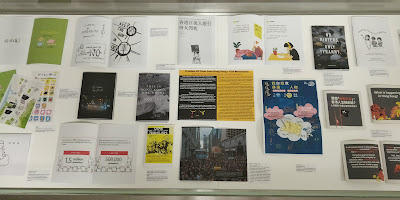 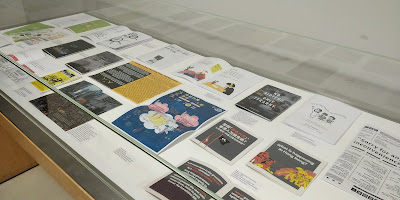 Nicola and I were keen to make a space for these zines in the library and Zine Coop have generously shared so many of these zines and resources with us. Today we are launching a temporary display in the library reading rooms highlighing these zines, and encouraging visitors to read and engage and use the zines. This display showcases some of the zines originally exhibited in the exhibition Freedom Hi! Zines from Hong Kong's Civil Movements in Vancouver, Canada in July 2019 co-organise by Hotam Press and Zine Coop. 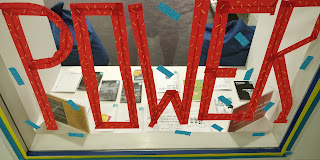 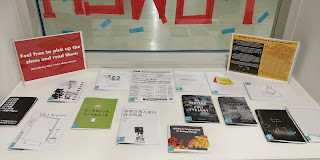 The zines are incredibly powerful and it's amazing to see that these vital publications have been compiled, made, and shared so quickly. They range from powerful photozines, sharing images of protests, injuries sustained by police, and vital resources for protesters, as well as personal experiences from Hong Kong, illustrated diagrams for counteracting tear gas, and principles to unite under. The front cover of Stand with Hong Kong published by 6am Press states: No breaking off, no blaming, no snitching, don't get hurt, don't get arrested, stay together, no one gets left behind. 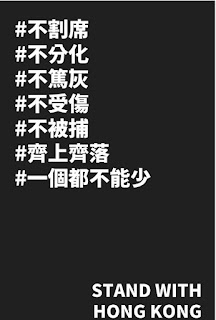 One of my main worries when we started the zine collection was the barriers in place within the library where zines were held in special collections, requiring identification and a booked appointment to see them. So it was brilliant that we were able to work with Zine Coop to make sure that the zines they sent us weren't limited or restricted in anyway. Copies of the zines are on display in a vitrine outside the library, but multiple copes of all the zines are also available for anyone to read, touch, and handle inside the reading rooms with no restrictions at all. 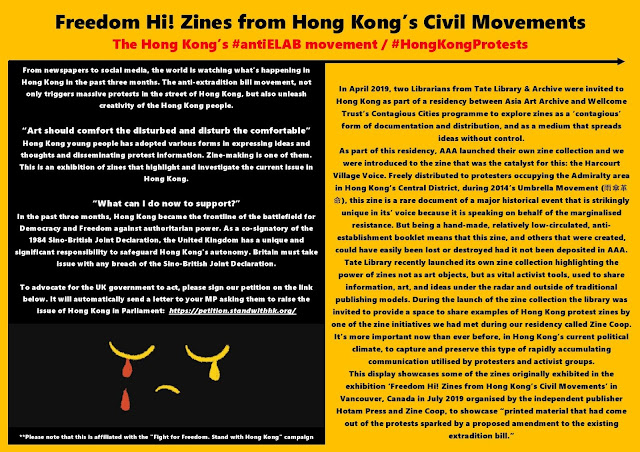 These zines are on display at Tate Britain Reading Rooms until Monday 7th October. The zines will then enter the library's zine collections permanently for anyone to access in future.
Posted by Holly Casio at 13:08 No comments: