As part of the wonderful new show Fat Blokes created by Scottee, my fave queer fatties Unskinny Bop were asked to collaborate on a zine to accompany the show. 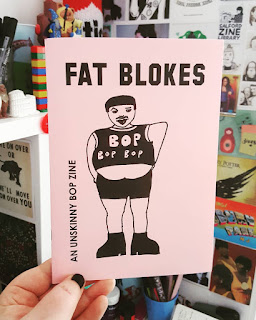 The zine is here and it's hot off the press! The zine features a comic from me about dancing and fatness and the time I saw Beth Ditto when I was 17 at Ladyfest Glasgow 2001. 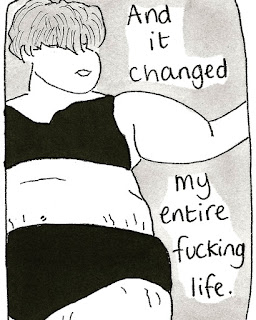 Ladyfest Glasgow was probably the most formative experience in my life. It's amazing to be able to pinpoint the moment when everything in your life changed, and this entire weekend changed my 17 year old self for real. The Gossip played their first ever UK show that weekend. I was in the front row as Beth Ditto sweated on stage and eventually stripped down to her underwear. She yelled that there was no body positivity workshop taking place that weekend so her fat body on stage would have to do.

The following year I attended the first ever Unskinny Bop at Ladyfest London 2002. Dancing and sweating in a club night which celebrated rad fatties with a podge pop countdown was a dream come true and despite my very recent initiation into the stay at home club (thanks sobriety and bad brain), Unskinny Bop has continued to be a space for me and my fat queer friends to dance and it's so exciting to hold another unskinny bop zine in my hands after all these years!

The zine accompanies the upcoming Fat Blokes show but I'm also really excited at the idea that these zines will  be distributed across queer venues, weightloss groups, infiltrating and taking up space with a celebration fat bodies and voices.

The Fat Blokes zine will be available digitally very soon. But for now you can find the very first issue of the Unskinny Bop zine from 2003 here 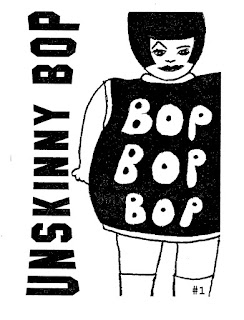 I can't wait for Fat Blokes to come to London in November, but in the meantime you can see previews in Manchester this month.