The economy of zines

There are two conversations on zines that just go round and round and round until the end of time. The first being "All hail the resurgence of zines! Zines are back!" And we all roll our eyes because we all know that zines never went away, but every now and then The Guardian or Vice will inform us of their return.
The second one is "Yeah but what is a zine? How do you define them? And should you  define them?"

I started making zines 18 years ago and those conversations were already old and tired back when I assembled cliched Drew Barrymore collages for my early riot grrrl fanzines in the 90s. They can be good conversations to have though, as zines change and adapt and I know we'll keep having them, particularly around defining zines.

The term zine is not an abbreviation for magazine, it is its own thing, which is zine 101. Sometimes you still see zine written as 'zine with the apostrophe as though something is meant to come before it. To be honest, when I was a teenager I hadn't even considered that zine would be short for magazine, and I had assumed that 'zine was an abbreviation of the term 'fanzine', which were the first few types of zines I ever read. So my viewpoint on this is totally skewed anyway.

In the last 10 years zines have gained more recognition which is honestly great. It's easy to be cynical when a major website or newspaper does its annual story on the world of zines, but my entry point to self publishing was from the time that Just 17 featured an article on fanzines and diy music, as part of an interview with defunct 90's teenage grrrl band Vyvyan. They printed a list of UK zines such as Abuse, All About D and friends, and Glitter Underground and I sent off  for my first ever zines. I was much more likely to read an issue of Just 17 than I was to read a zine aged 13, and Just 17 changed my life for real.

The rise in zine recognition is great: there are more zine fairs than ever before, you can find out how to make a zine by reading Rookie or watching youtube tutorials, you can buy zines online rather than having to send £1 coin sellotaped to a bit of card in the post to a stranger, there are zine workshops in public libraries, it's ace! And the term zine itself has become much more diffused.

In the last 10 years or so, the term zine has been used interchangeably with things like artists' books, small press comics and illustration, independent magazines, photobooks, etc. All of these things are forms of self publishing and are radical in themselves for operating outside the traditional mainstream forms of publishing. And zines themselves have changed. From political pamphlets, to football zines, sci-fi zines, fanzines, perzines, punk zines, art zines, poetry zines, photo zines, and beyond. They haven't always been one thing, and they should never be just one thing. It's important to see them change and grow.

But despite the change in audiences, themes, and subject matter, the term zine is always rooted in diy non-profit forms of self-publishing. That is really their only defining feature. anything else - subject matter/format/binding/style - is fair game.

I'm aware that zinesters often come across as petty when we discuss and try to lay down the parameters of what is a zine and what isn't a zine. It's just a term and why can't we embrace change, and who the hell are we to decide? I've been making zines for 18 years, I co-founded two zine library collections at the Stuart Hall Library and Tate Library, but I'm not a guardian of the term zine, my opinion doesn't actually mean shit, and I honestly have no right to tell you what is or what isn't a zine. Nobody does.

Defining zines isn't petty though when it comes to the economy of zines. The point of zines is to make them as cheap as possible and to distribute them as cheaply as possible. Are there problems with the zine model? Totally. You have to know what a zine is to be able to access them for a start, And to make them you need access to a cheap photocopier, etc.
Zine culture, like a lot of activist culture is guilty of being too white, elitist, cliquey, and inaccessible. But the very basic idea of zines is to share your ideas and create something quick, and very cheap. It doesn't have to look glossy and professional. Of course if that's your aesthetic then that's cool too, but zines are non profit.

One more time: Zines are non-profit. That's the big defining feature. It doesn't make your artists book, comic, magazine any less radical or important or inspiring if they are made for profit or to develop your career. People need to eat and pay rent and make a living and writers and artists deserve to be paid. Artists should asbolutely be able to make a living from their art.
It also doesn't mean that zines are inherently better than other forms of self-published works. These works are still radical, they just might not be zines, and that's totally ok. We can still co-exist, we still table at many of the same zine fairs because we are still operating under the same umbrella of diy self-publishing.  It just doesn't make them technically zines. Because zines are non profit.

The art of the zine swap is a major custom of zine culture. This has always been part of zine life and zinesters openly trade their zines with other zinesters for free. You don't view it as losing money, you view it as exchanging your ideas and that's really the point of zines, to share ideas quickly and cheaply.  Most zines are meant to be shared and passed on, and it's common to see anti copyright/copyleft disclaimers in zines encouraging readers to make and distribute your own copies/scans of the zine and share with others. It's part of what makes a zine, that it can exist outside of traditional publishing economies. And while this non-profit model works for zines, it probably wouldn't work for independent magazines for example, which requires profit to sustain the work and to pay writers.

The reason why zinesters feel passionate about defining the term zine is because we've seen diy models of production co-opted by people precisely trying to make a profit or to elevate their status, using diy as a stepping stone to 'making it.'

It can feel gross to overhear someone bragging about how much money they have made from their zine. We've cringed when people apply the term 'business model' in relation to their zines, when creators discuss promoting and marketing goals in relation to zines, when people refer to making zines as their job, or when we've picked up an expensive art magazine filled with advertisements calling itself a zine. Absolutely none of those things would bother me if the term zine was removed from the situation.  Want to make a living from your art? Go for it, I want to support that! Want to crowdfund your book? Sounds good, I'm in! Want to set up a independent magazine and pay your writers? I'm so down for that.

The term zine comes with a history and context which implies radical methods of publishing and sharing.  It's not just a bunch of zinesters being petty over semantics saying 'you can't sit with us.' You can definitely sit with us, there just needs to be an understanding of that context. As an art librarian for the last 10 years I've seen the trend of lecturers and teachers  in art schools using the term 'zines' interchangeably with 'artists' books' on book making courses without explaining any of the cultural history and context associated with that term. Art students then create artists' books, calling them zines, and then get frustrated when they aren't able to sell their artists' books for £30 at zine fairs when the average price of a zine at the same fair is £2. The context of the term matters.

Zines aren't just a way of describing a cut and paste aesthetic in the same way that 'punk' wouldn't be applied to a designer t-shirt  covered in safety pins. I don't think anyone wants to police who gets to call their work a zine because that establishes hierarchies and rules which go against the point of zines in the first place. And this conversation will be repeated over and over until the end of time anyway.I'm sure zines will continue to adapt and change in ways we haven't thought of. I just hope they always maintain that link with non profit diy publishing.


This is Fake Diy zine available to order here: 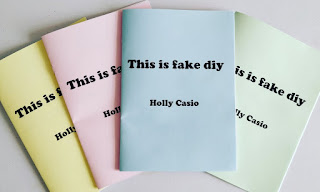 Email ThisBlogThis!Share to TwitterShare to FacebookShare to Pinterest
Labels: zines