I know that just because it's the new year doesn't mean that I have to make resolutions, I can make change anytime I like during the year. But it's like when I start a new notebook and the first page is all untouched and perfect and I do my neatest handwriting using my proper best pens and I feel like oh shit maybe this is the notebook that will sort my life out and then by page 4 everything is a mess again. It's nice to get swept up in the optimism.

2016 was both hard and good in lots of ways. In the wider world there were lots of bad things happening - celebrities were dying and fascisim was rising. I also lost family members this year, I saw less my of friends than I liked, and I was ill a LOT. 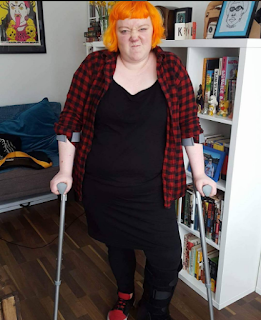 My health was awful. I fractured my ankle, I had an operation on my bum, I had infected cysts, I had tonsillitis 3 times, and my arthritis knocked me back on crutches again. My mental health was super bad and my ocd came back in a pretty massive way after laying dormant for most of the year before. My weird patterns and rituals came back, I developed new and annoying nervous tics which I couldn't control, one of these got so bad it threw my back out. Solidarity to everyone else on super long waiting lists for cbt and other mental health treatments.

But lots of amazing things happened last year and I'm pretty glad they did, especially when it came to zines.

I decided that my lack of artistic ability didn't actually matter and started my new diy comic zine Cool Schmool. 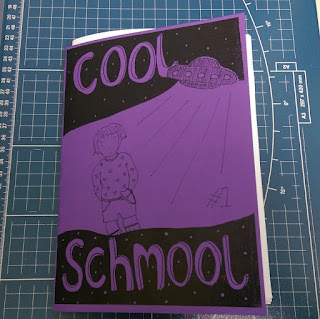 I also made 4 other new zines - My Mad Fat Zine, Bite Me, Sick Sad World Tour zine, and Not Queer Enough. I tabled at a bunch of zine fairs like Northwest zinefest


I took part in a roundtable on zines, hosted 3 workshops on zines and did a zine reading with Salford Zine Library gang.

Basically zines continued to rule my world and I don't see that stopping any time soon. I spent most of my christmas break listening to the Moana soundtrack and working on two new zines that I hope to have out later this year and a mini zine in time for sheffield zine fest.

2016 was also the year I tried to manage my burnout better. Making zines and comix and writing and playing in bands outside of work can be a lot of, well, work, especially when my health was shit. I played a bunch of gigs with my band The Potentials, I also played bass with Yiiikes. We put out a new ep, recorded a new single, made a pop video and went on summer tour with a bunch of babes.

I also hung out with my bff Bruce Springsteen last year, have I mentioned that? 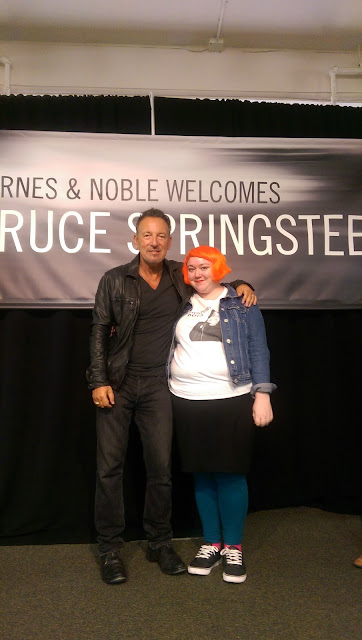 I don't make new year resolutions but I do have some stuff I'd like to do this year. And if I don't do them then it's ok, I won't beat myself up over it. I want to make more zines, be more posi, be a better activist, stay at home more because being away from home every single weekend is making me poor and tired, finish this online art history course I've been dragging out, go the doctors more rather than just leaving things to get worse for a year and then being too scared to go, and I dunno, maybe listen to the Moana soundtrack more.

See you at Sheffield Zine Fest in Feb!
Posted by Holly Casio at 08:17