So it feels like the world ended.  I can’t watch any more rolling news, I can’t watch the bbc blame everything on Corbyn or talk about the working class like they are a different species. I can’t talk to my racist nan who voted leave. I can’t see another England flag in the streets waving it’s stupid nationalistic pride in my face. I can’t stand politicians that can't fucking engage with people outside of London or learn how to talk to people rotting away in poverty, and I can’t look away from the constant reports of the rise in racist/xenophobic attacks, abuse, and intimidation.

I’m angry and I’m scared and all the zines and music and writing I make feels so frivolous and trivial this week. 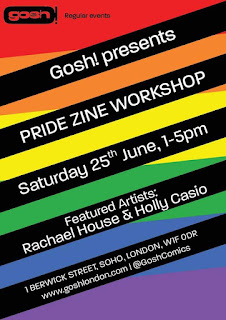 So Saturday morning was not a great day to get out of bed and go do a zine workshop. Honestly I just wanted to stay under the covers and put a sad Springsteen album on (probably Nebraska or Tom Joad on repeat) and not really face the world. It was London pride, but I didn't have any pride in a Smirnoff sponsored pride (I don't drink), with an RAF flyover (I have no pride in military), and if anything I'd hoped to scrape together enough energy to attend the queer picnic in south london led by qtipoc. But first I had a zine workshop to attend.

Gosh comics very kindly asked me to co-host a zine making workshop for pride with the wonderful Rachael House, an artist and zinester I’ve long admired. One of the first zines I ever got was one of her Red Hanky Panky zines, so it was ace to be able to do this with her. The idea was to get people to stop for a bit and make an lgbt zine about pride, sexuality, gender identity, bodies, crushes, or anything at all. On a day like last Saturday I wanted to encourage people to come and make angry angry queer zines about Orlando, about Jo Cox, about the referendum, about being queer and muslim, about how QTPOC bear the brunt of the majority of LGBT violence, about immigration, about refugees, about feeling queer and European, about Smirnoff sponsored pride, to get out some of the anger we were all feeling.

I ended up making a mini comic about what it's like to not feel queer enough: 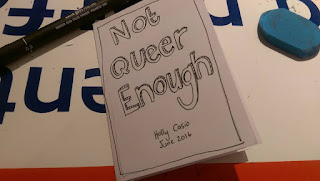 In reality a lot of people made much more positive zines, about hope, about love, and relationships, about what pride means to them, so maybe it’s good not everyone was as angry as me. Like this lovely person who made a zine addressed to their unborn nibling about being a cool gay aunty: 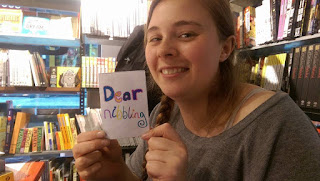 Some of us made angry and critical zines, but regardless of what zines we made we talked constantly as we made them, talking about the referendum, about racism and xenophobia we had seen, about Orlando, about Jo Cox, about corporate pride, about how scared and angry we were. We talked about the demonisation of the working class, about ageism, about not feeling queer enough. We also talked about comics and The Lord of the Rings, about fanfic, and about school, about music, about punk, about books, about clothes, about art. We shared our coming out stories, we talked about our relationships, we talked about bi-erasure, we talked about gender queer identities. We talked a LOT and it was so needed.

It was a small but lovely crowd, and lots of people made their first ever zines with us. 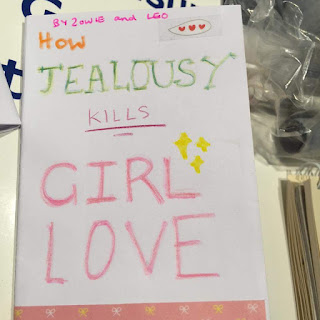 My partner even came and made his first ever zine: 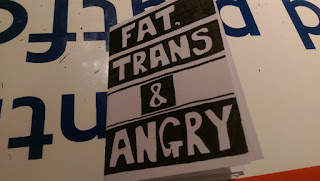 The first thing that nearly everyone said as they sat down with us was 'I don't know what to write' or ‘I can’t draw’ . Rachael had great advice that the drawing only had to be strong enough to hold the idea they were trying to show. It didn’t matter if you couldn’t draw, if you had never written anything before, making a zine was about sharing ideas and people really got on board with that. 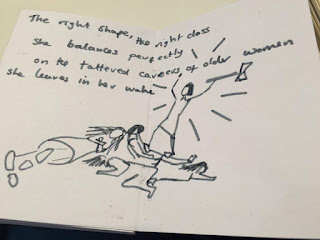 Sitting round a table in one of my favourite comic shops, getting angry and sharing ideas and making things with people was so needed. Staying under the covers and listening to sad songs is ok too, but I'm glad I was able to get out and make things and feel productive and talk and escape for a bit.


Thanks to Gosh comics for having us, and thanks to everyone that came and made their first zines, they are all so rad!
Posted by Holly Casio at 11:23 No comments:

I wanted to post a quick self-promo post about how it's Northwest Zine Fest tomorrow and come and get my zines blah blah blah. But it's been a really hard week and I'm just feeling drained.

The massacre at Pulse club of mostly LGBT Latinx people and the straight/cis/white washing of that attack; the murder of Jo Cox and the inability to call such a thing a terrorist attack because the terrorist was white with a 'history of mental illness'; TERFS (trans-exclusionary radical 'feminists') bringing the transphobic argument against trans people using public bathrooms to the UK; and the general feeling of islamophobia + racism + male violence + toxic masculinity+fucking brexit, all mixed in with seeing fucking England flags everywhere I go this week because of the football has got me in a slump that's so hard to shake.

Doing your day job with people that might not talk about these things or talk about them in a wrong way is hard. Listening to family members talk incorrectly about immigration and racism is hard. Feeling everyone just carrying on as normal is hard. This week is nothing new,  and racist and lgbt attacks and murders happen all the time.

I attended the vigil at Vauxhall Gardens on Tuesday night for the victims of the Pulse massacre which was organised and led by LGBT London Latinx. I hugged my chosen family and held them close, I cried, and it was cathartic and powerful. I went home last night after hearing about Jo Cox and I cried while my partner hugged me and I couldn't even stand up. I need my people around me this weekend. While it's not the real world and terrible things are happening and I can't even think about the referendum next week, I just want to exist in my queer bubble this weekend with my mates and with people who matter and aren't necessarily going to say the wrong thing, who are going to acknowledge the shitness of all of this, and who feel just as drained as I do.

So I'll be at Northwest Zine Fest tomorrow, flogging my photocopied bits of tat, chatting shit about Bruce Springsteen, pretending for one day that I can draw and it's ok that I made a comic with no drawing skills, and talking with people who get it and make stuff and feel drained too. I'm looking forward to seeing everyone's new zines and seeing people be creative when I know it's not always easy to do that. I'm looking forward to reading about people's lives, seeing their art, seeing the new things that they have made. And  I'm going to read my stupid YA fantasy book on the train about a bloody magic stone, I'm gonna treat myself to some percy pigs, and I'm hopefully gonna  have a day where my chest doesn't feel so tight.