Last month I started a band with my mates Zak and Shahnaz, we are The Potentials! We were united by  lifelong obsession with the tv show Buffy the Vampire Slayer and a fucktonne of enthusiasm. Not so much musical ability though. We decided to form a Buffy band, singing songs about our favourite characters, addressing the tough issues such as why does Riley suck so much, ditto for Kennedy, and imagining a world where Cordy and Glory go shopping to the mall together.

I love concept bands, they are my favourite bands to be in. A few years ago I was in Shrieking Shack Disco Gang. We played songs about Harry Potter and became part of the UK Wizard Rock scene playing at Wrock events and coventions and conferences and it was ace. I'm dead chuffed to be in  concept band again. 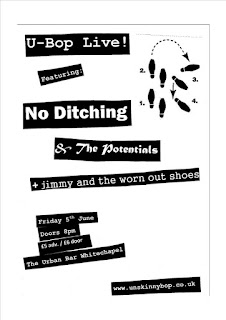 We are playing our first gigs this weekend and I'm excited! Tonight we are playing with our absolute favourites No Ditching, as well as Jimmy and the Worn-Out Shoes from lifelong heroes The Blue Minkies, organised by Unskinny Bop. And then tomorrow we are playing at Astbury Castle. We've got more gigs lined up next month, and some proper recordings coming once we've finished sorting out the hellmouth and shit.

Our facebook thingy is here and our demos are here.

Here's a song about how Parker is a mr nice guy slut shaming dickhead.

Email ThisBlogThis!Share to TwitterShare to FacebookShare to Pinterest
Labels: The Potentials