I'm on a Disney detox. It's part burying my head in the sand, sticking my fingers in my ears, and closing my eyes to all the bad stuff, but it's also a much needed bit of self care for my brain which is going over to the dark side.
My brain can't handle real life anymore. Watching the news, watching telly, reading torture reports, watching police murder black people, seeing poverty laughed at, reading about cuts and more cuts then some extra cuts for some lolz is sending me into a black hole. That's not emo hyperbole, I'm genuinely getting heart palpitations and panic attacks and dizzy spells of late. I get angry and scared and sad. The other night I flew into a tearful rage at a 30 second clip on Rude Tube on telly because I felt it proved that all men hate women and it was the last straw for that rotten lousy day.

The world is a gigantic shit storm. People are cruel and mean and corrupt and evil and selfish they enjoy every ounce of privilege and don't give a shit about anyone else. Usually my anger gives me energy to be posi. It makes me want to do things whether that be attend a protest, or write a zine or write songs or have a dance and find strength in my queer working class bubble. But lately I feel overwhelmed and unable to do anything and my posi self is struggling.

In between Real Life Shit, I've been living on a heavy diet of horror films, true crime stories, and documentaries about serial killers by the fucktonne recently. My respite from real life is just an extra dose of dark shit and my head is having a not so great time because of it at the moment. Plus I'm constantly convinced that there is a serial killer lurking in the flat when I'm trying to sleep. It's like I'm 8 years old again and having to sleep with the light on because I'm scared of vampires. I had to stop watching The Fall because I couldn't sleep for 4 nights and had panic attacks in the dark. I don't care how amazing Gillian Anderson is, I can't watch it anymore.

So I'm on a self imposed ban for the next week from any of that stuff. Trying not to read as much of the news, or maybe not getting myself into such rage fuelled rant which gives me heart palpitations at the end of the day when I'm supposed to be relaxing. I need a bunch of silly fun stuff and make believe to recharge batteries so I'm stocking up on cartoons, Disney films, rainbows and unicorns and sugar. Posixcore!

So if you need me in the next week I'll be hiding under the covers with these:


High School Muscial is the ultiamte in posixcore. Everytime Troy Bolton gets frustrated at the world he just goes dancing on a golfcourse. 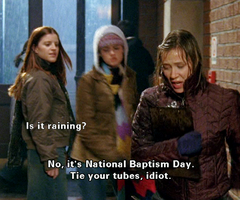 I'm midway through season 5 of my epic Gilmore Girls and it's very easy to tune out the real world when people are talking fast and drinking coffee in Connecticut. I'm not the only one who uses Gilmore Girls to hide from everything, No Ditching even wrote a song about it

I don't think it's possible for me to love Paramore anymore than I already do but this new demo with the deluxe album had me skipping round my bedroom for days. And for some extra posixcore vibes I might even have myself a Paramore acoustic youtube party and watch Hayley show off her vocal power for some additional happy magic.


An oldie but a goodie

Sometimes I turn to Bruce for insight, for songs about dealing wih shit. Like how next week my Dad is finishing work after 31 years at the factory due to redundancy and so I've been listening to songs like Factory and This Hard Land a lot and thinking about the lyrics 'stay hard, stay hungry, stay alive.' And other times I turn to Bruce for a laugh, and nowt makes me laugh like the Springsteen crotch slide.


HP can lift me out of most moods, but Harry's dancing is capable of conjuring an Expecto Patronum spell no probs. Accio posixcore!