Saturday 5th April was many things! It was 20 years since Kurt Cobain died which a lot of people who don’t even like Nirvana seemed to really care about this year, it was my brother’s birthday (HAPPY BIRTHDAY BRO!) and it was International Tabletop day with gaming events held in comic/game/book shops and libraries and in people’s homes all over the world.

Me and my friends game a lot together and it is the most fun. As well as playing D&D every other month, we also regularly have game nights where we play all kinds of tabletop games. It’s cheap and so much fun and we usually eat so much pizza that we all have pizza babies and then our pizza babies have pizza babies. I love tabletop games because I’m dirt poor and I can’t afford to go out much. I also never really played board games as a kid. To this day I have never played Monoply and I feel like I’m making up for lost time.Having the option of having ALL THE FUN IN THE WORLD for absolutely free with my bffs is bloody brilliant.

So for International Tabletop we got together for a day of gaming. We had big plans, we were gonna play ALL THE GAMES! 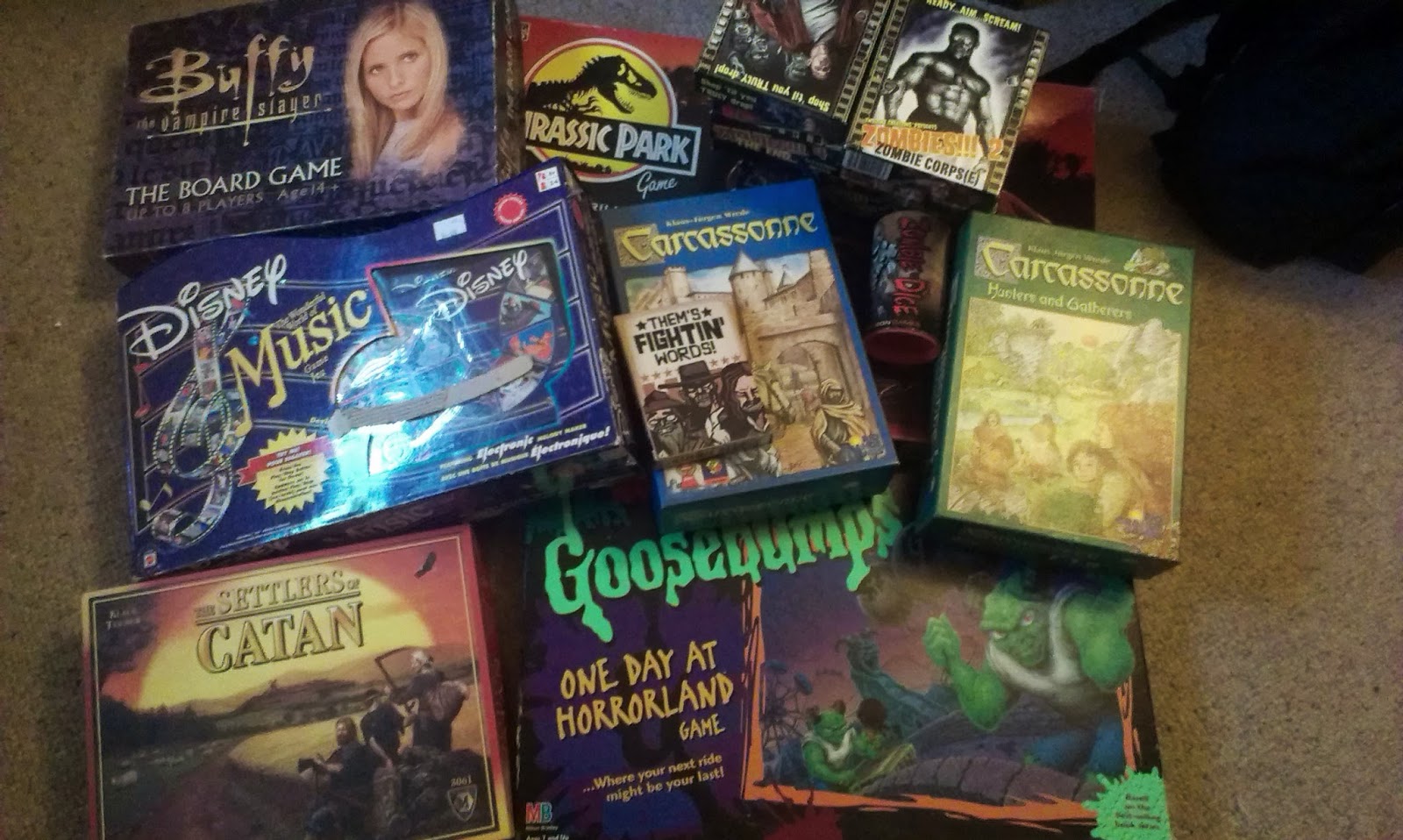 Ok so we didn’t play all of these games, there was only a day to fit it all in. There’s boards to set up, rules to read out, and pizza to eat and we are on a schedule!

We usually manage 3 or 4 games. We like to mix up 2 biggish games that take a couple of hours to play, as well as the smaller games that can be played really quickly to break things up like Zombie dice. We like zombie games.

So after some pizza (there is so much pizza!) we get started with some super fun Zombie Dice. 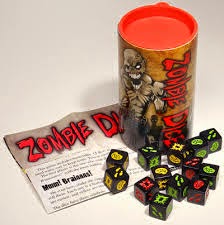 The aim of zombie dice is simple – you select 3 dice and roll ‘em. If you get three 3 gun shots symbols then you are out, but if you get footstep symbols you can keep rolling. You need to get 13 brain symbols to win. I like this game cuz there is absolutely no skill required just dumb luck. Some of the more competitive members of our group probably get super frustrated with this game for that very reason. Zombie dice is ace cuz you can play it with as many or as little people as you like and even though it’s a quick game to play, you can play it loads of different times with lots of different outcomes. We probably spent about an hour on zombie dice alone. 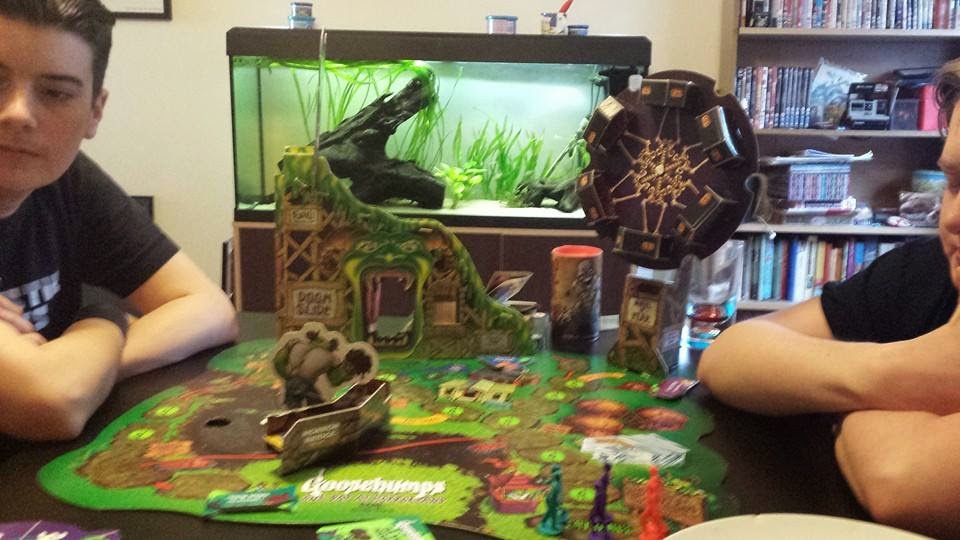 After zombie dice, we continued our horror themed games with Goosebumps the boardgame. The edition we are playing is based on the Horrorland series. I first played this at my friend Seleena’s birthday party last year where she had a teen sleepover party. It’s super fun but requires you to be quite mean and sneaky to your opponents. This is something I’m quite bad at. In all honesty I think I’m probably a bad person to game with because I’m not competitive. I don’t really strive to win, I’m just happy to be there (Hufflepuff through and through) and so I don’t really get into strategising against other people. Which means I don’t win a lot, but I have fun. And did I mention the pizza?
Goosebumps is fun cuz it’s a wee bit like Mousetrap in that there are a lot of parts to set up before play. There’s the death slide, the horror wheel, and the haunted bridge. Your players need to go round the board, collecting cards, and riding each of the horror rides. It’s not enough to ride, you need to survive, as the other players can try and knock you off the ride. It’s a fun game and once you get past the overly complicated rules at the beginning it’s a super fun game to play. We played in teams and my team won! My prize was pizza

Then we got out the big guns, Settlers of Catan. This has been sitting unopened for about 6 months now. We always mean to play it at games day but we never get round to it. There are lots of games like that though. We each have so many amazing games that we can’t possibly play them all. So after setting up the board and reading out the instructions we were ready to play! Well actually after setting up the board we made a cup of tea and re-read the instructions again, cuz man, that’s a lot of instructions.

It’s like a peasant version of monopoly, like if monopoly was set in Rohan. Players need to roll die and collect resource cards – wheat, stone, brick, sheep, wood, to build walls, settlements, and eventually cities. Settlements are awarded 1 victory point and cities are awarded 2 victory points, and the first to get to 10 victory points wins Catan. I also think it should be law that at the end the winner shouts CATAN! Like you would shout BINGO! when you win. This is not yet written in the instructions though.

It’s a good old fashioned strategy game as you need to think about your road and settlement placements as well as trying to work out what the other players may be doing. Some of our gang became expert card counters and somehow always knew when I had a fist full of wheat in my hands. Wheat! Ugh! At first it’s just non stop wheat cards when you are yearning for a rock or a brick card, but be warned: towards the end you’ll be wishing there was more wheat cards cuz all you’ll have is brick. BLOODY BRICK!

We played in teams and my team won! Well the first time we played it we realised we’d actually accidentally cheated and put a settlement in the incorrect place. But not to worry, we played again and won for realz this time. I can’t take any of the credit for that though. I was in a pizza coma by that point and not really helping much. 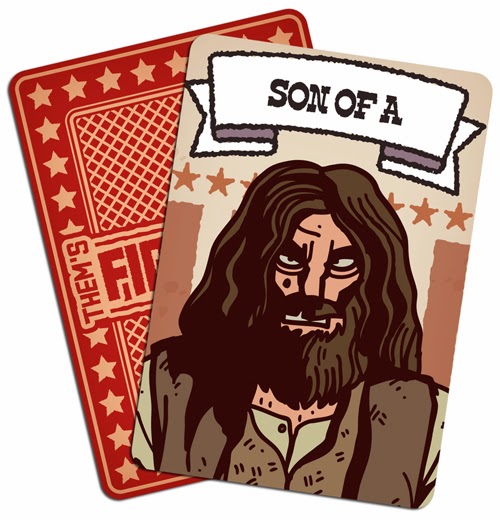 After a big game like Catan, you need a little fun game to break things up – gaming is TIRING and game fatigue is a real thing. Since Uno is now banned from our game days as SOME of the gang get a little bit too competitive, we decided to have a quick game of Them’s Fighting Words. TFW is a fun little card game based on memory. Each player is given a series of insults. You place down the card and read out your insult, the next player then has to remember the insult you just read out as well as reading out their own. It goes on and on until the player can’t remember the string of words and they lose a life. You have 3 lives and then you are out. It sounds boring but it’s actually fun. It’s based on wild western cowboy type insults, and so the game is best played when putting on ridiculous accents.

After a few rounds of Them’s Fighting Word’s we realised we’d been gaming for about 9 hours. We all had gaming/pizza fatigue and rounded off the day with a sleepy yet passionate re-watching of Catching Fire, raising our hands for a three fingers salute in all the right places. Games day is the BEST!
Posted by Holly Casio at 14:58