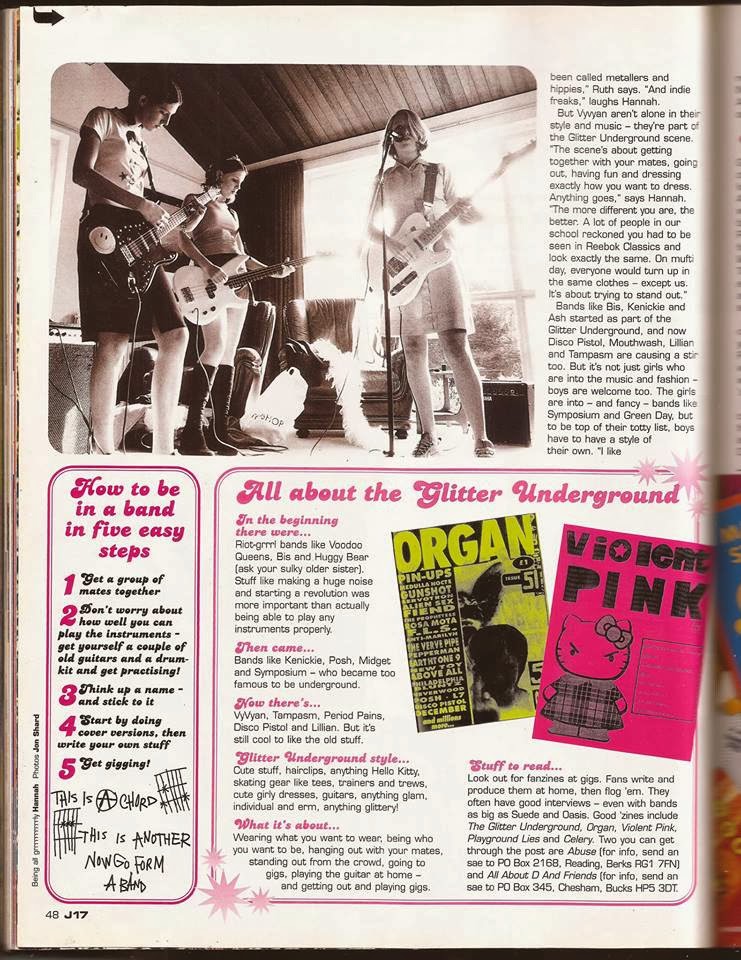 Ok so true story, here’s how I got into zines. Back in 1997 I read an article in J17 (the golden age of J17). The article featured an interview with British girl punk band Vyvyan and included a column explaining what fanzines were with a list of fanzines such as All About D, Organ, The, Glitter Underground, Playground Lies including addresses of where to get them from. This J17 article is the reason I will never really get huffy about mainstream press coverage of zine culture because that article changed my life for real, this is the article that introduced me to the world of fanzines. 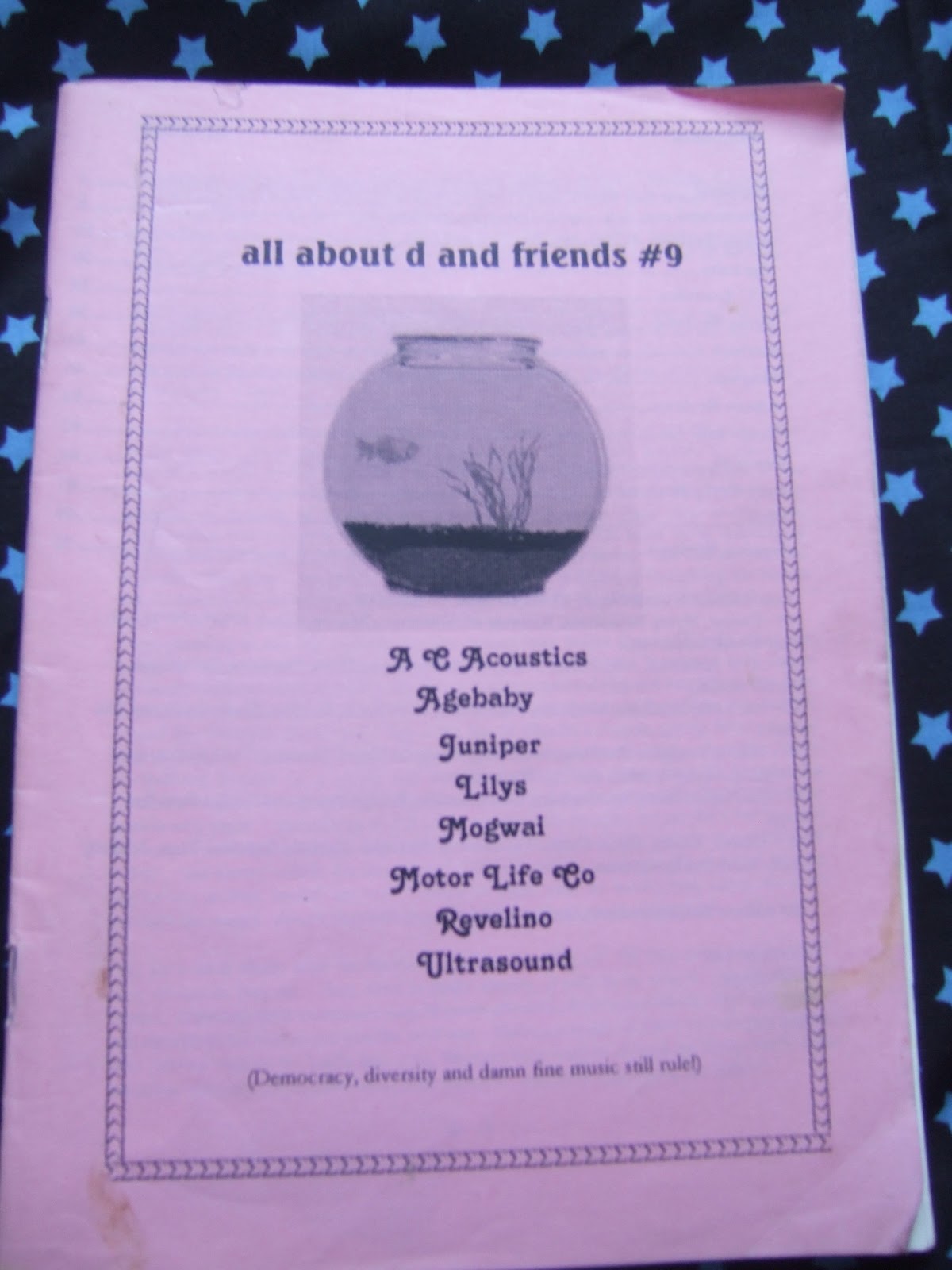 After reading the article I sent off for my first ever zine. All About D was the first zine I ever bought. It was a music fanzine written by Dee, who interviewed bands from the diy teen-c bedroom glitter pop underground.  I lived in a tiny town in west and didn’t have a record shop local to me, I didn’t have any opportunities to go to gigs til I was much older, and as it was pre-internet I had no idea how to discover what was ‘out there’ other than listening to Steve Lamacq and John Peel. Like most queer weird and awkward teens I was obsessed with what was ‘out there’ and desperately wanted something bigger than my own experiences.

Fanzines were my first real experiences into this world. There were music fanzines providing interviews and reviews of bands I’d never heard of and would never get a chance to see. But they were written by real people with spelling mistakes and dodgy photocopies and blurred pages and grainy black and white photographs taken at gigs I would never get to go to, and they included personal information about their lives at the same time. It wasn’t like reading Melody Maker, it was like an extended letter from a penpal. They were funny and clever and silly and asked hard hitting questions like ‘who is your favourite powerpuff girl’ rather than boring questions about tour dates and the recording process.

In the late 90s and early noughties I wrote zines like Angel Food and Go Lola which were mostly music fanzines. I interviewed all my favourite bands realising that there was no magic to the interview process, I could write to a record label and ask for an interview, usually a paper questionnaire as bands weren’t often passing through Dewsbury. I wrote about bands like bis and Bratmobile and Helen Love and Lady Die and Angelica and The Butchies and Bangs and Sleater Kinney. My zines were also very personal with lots of awful teenage angst thrown in there alongside a nice Drew Barrymore collage. In fact when telextext reviewed Go Lola #2 they only gave it 2 stars (this has haunted me to this day) because it was too personal. But it was unashamedly a fanzine. It was all the things I loved and geeked out about on a page. I don’t think I read a single perzine for years to come, fanzines were my world.

Through the years I discovered perzines and loved reading about other people’s lives and experieinces that were the same as mine, as well as those that weren’t which opened up my world in lots of ways. Perzines are powerful tools, and growing up queer and discovering queer perzines was incredibly empowering. But I can equally say the same about fanzines.

Pop culture is engrained in my bones. Like in the episode of Supernatural where Dean and Sam get Enochian sigils engraved on their ribs by Castiel. Oh my god did you see what I did? I have no shame in being a fan of things and I absolutely LOVE writing about the things that I love. I think that’s what amazing zines do, they take the thing that the writer loves/hates the most and describes it through their own experiences/backgrounds/viewpoint. Perzines do that too, they are a window into someone elses life and I see no distinction. 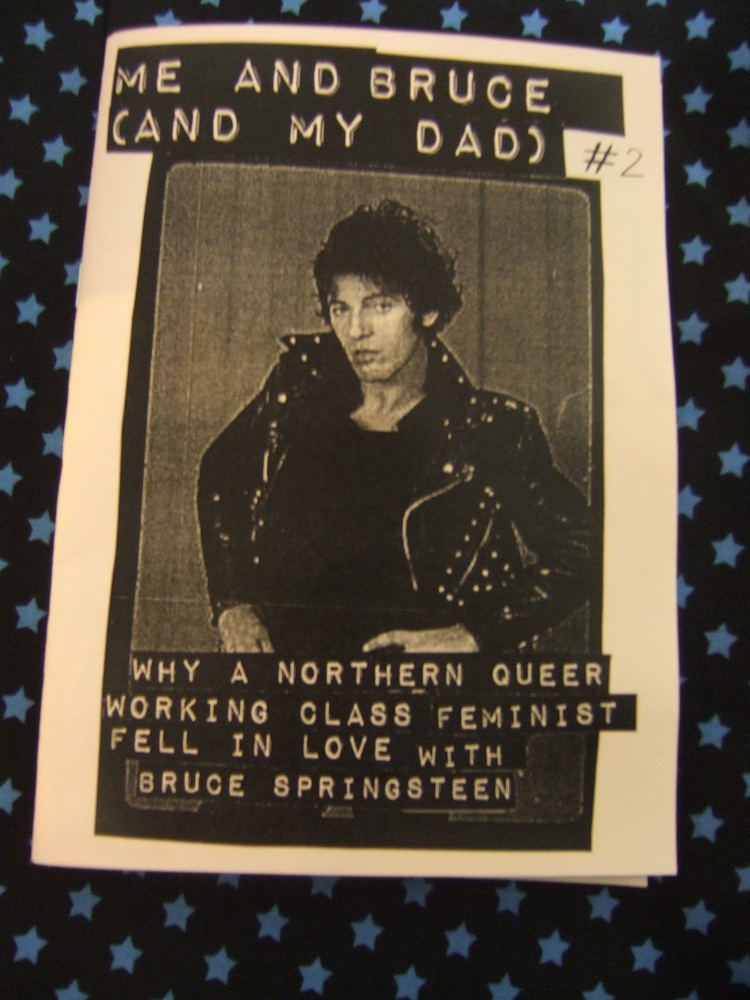 Last year I wrote a zine called ‘Me and Bruce and my Dad’ which is issue 2 in a series of zines written about Bruce Springsteen. On the surface it’s a music fanzine, and even worse, it’s a fanzine about Bruce Springsteen. That’s a pretty damned niche zine right? I often have to tell people ‘it’s ok, it’s a perzine really!’ in order to get them to consider reading it. Asking people to read a fanzine about Bruce Springsteen when they may not like Bruce Springsteen or fanzines can be a task. The zine is actually about my Dad and my own experiences as growing up working class then moving away from home and feeling disconnected from my middle class surroundings. It’s about my working class roots and my Dad’s experiences, and I’ve simply appropriated some of Bruce Springsteen’s lyrics as a way to try and justify my fandom and my experiences. I’ve not been able to send this zine to a few distros as they don’t accept music zines or fanzines, and when I have sent it to people I’ve had to over explain that it really is a perzine, honest!

Fanzines can carry just as much weight and as much insight and as much validation as reading a perzine. I like that zine culture is broad with many different genres and forms. Except expensive art zines ( a tenner for some lino printed images of birds on tracing paper bound by a bit of string? Nah mate) which are really artists’ books, I feel no shame in differentiating there. Even the driest of fanzines can be totally validating, to posess a zine written about something you love makes you think OH MY GOD SOMEONE LOVES THIS G ?? IM NOT ALONE IN THE UNIVERSE! Obviously with internet fandom you are maybe less inclined to rely on fanzines to have those feelings, but to see a zine in print about something you love, to interact with those fanzine writers at zine fairs and to find an entry point into the world of zines through a fanzine is a pretty wonderful thing.

I like the small silly zines about people’s favourite bands, tv shows, writers, artists, films, books. I love reading people getting passionate or angry or defensive about the things they love. Being a fan isn’t passive, it can be incredibly creative and proactive and inspires some brilliant zines and writing and art and I love people who love things. I will happily read a zine about every good tv show that has a special paintball episode or a zine about someone's Placebo fandom just as much as I would read a zine about someone’s daily personal experiences.


Which is why my next zine is going to be about Batman, and which is why I’m referring to myself as a fanzine writer from now on.
Posted by Holly Casio at 13:25