New zine!
I'm currently swigging Benylin like it's pop and cursing my yukky infected tonsils. I'm ill and exhausted and have BURNOUT from doing too many things and over stretching myself. BUT the main thing is I made a brand new mini zine for QZFL! 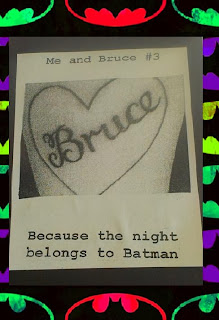 Because the night belongs to Batman is #3 in my Me and Bruce series of zines. I've collected some images from some of my favourite (and silliest) Batman stories and set them to the lyrics of Bruce Springsteen. The two Bruces go surprisingly well. I mean Gotham City is set in New Jersey, and they are both white millionaire superheroes. The similarities between them are endless.

It's a silly zine but I wanted to put something out in time for QZFL. It's my 5th zine of the year and even though Dancing in the Dark only came out a few weeks ago, there's some horrible guilty feeling that I have if I table at zine fair without a brand new zine. Plus it was a way for me to combine my two massive loves - Springsteen and Batman. My biggest regret is that I couldn't use the famous  'I'm the goddamn Batman' panel in the zine for one of the pages because it's so iconic and stupid and would have fit really well with one of the lyrics. But the text preceding that specific quote includes language that I find too offensive so I left it out.

You can order my zine from my zine shop here:

Queer Zine Fest London 2013
Queer Zine Fest was a blast! The amazing Charlotte Richardson Andrews organised the entire damned thing and it genuinely felt like queer christmas. QZFL stands out above all other zine fests for me. Knowing that the zines and creators and distros are mostly queer and/or trans* makes a massive difference, I don't have to go searching for queer scraps like I often do at other zine fests.

I tabled with the amazing Kirsty Fife, creator of Hard Femme zine. Major props to Kirsty for being ridiculously brave and inspiring by giving a talk all by herself and for giving readings from some of her zine. it was ace to see just how busy her stall was after her super successful talk.
Also my two neighbours were the bloody wonderful Melanie Maddison from Shape and Situate and Colouring Outside the Lines and Amy Wright from Slug Pie. Here's me and Amy having an in-joke. 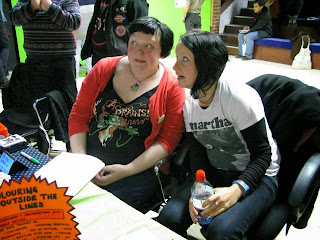 It was super busy all day with incredible zines all day long. The best part about it - none of the ridiculously expensive artists book/art zines that you get at nearly every other zine fest. AMAZING! I'm so thankful to Charlotte for organising such an important and positive event. 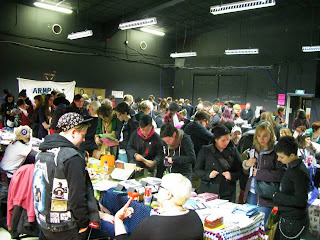 Burnout
QZFL marks one of my last big activities for the year, and now that I've stopped DOING SHIT, I realise I have burnout in the worst way.

I feel guilty all the time unless I'm doing something, making something, planning something, and working my guts out. Even if it's not working creatively, I've been killing myself at work as 60+ hour weeks are now becoming standard. Nobody has told me I have to work 60+ hour weeks, I just have the most guilt if things don't get done.

In the last few months it feels like I haven't stopped and part of me is almost embarrassed to admit that. It's sort of embarrassing admitting that certain projects and activities have taken lots of time to work on and complete. Recently I was involved in a super incredible queer and body positive dance show that took a lot of time. I was in rehearsals most nights per week and when I wasn't in rehearsals I was busy making the zine for the show. Part of me was embarrassed to admit to people that I was spending so much time over one thing because I have a stupid voice in the back of my head that worries that when people see the final result they will go 'really, you spent ALL your time and energy and THAT'S all you have to show for it??' Or when I made my dance zine recently which took a lot of work and research and involved having to chase down contributions from dance organisations that weren't responding super quickly, and involved me re-writing the whole thing 3 different times. I was almost ashamed when my zine was finally completed and people could read it for the first time because there was that niggling doubt that people would think it was ridiculous that it took me so many months just to write a silly little zine.

It's self doubt and it's guilt and it sucks.

I've not replied to emails in about 2 months, I've got texts and missed calls and voicemails that I've not even opened yet,  I'm behind on sending out zines, I've not been able to write much for FBS recently, and I'm behind on seeing people and actually being a good friend to the best people in my life. And that adds more guilt.

Yesterday I granted myself a sick day. I stayed in bed, ate an entire advent calendar, watched Modern Family all day and then slept. And instead of feeling relaxed I just felt guilty that I wasn't doing anything. All I could imagine was the huge to-do list building while I lay there.

So I'm gonna be saying no to a lot of things right now and it might take me a while to reply to your email and I'm mega sorry if I've been a crummy friend recently but I'm hibernating for a bit til pep levels are fully restored.