I'm back from my Springsteen tour adventures!

The last couple of months I've been following selected shows on the 2nd leg of the Wrecking Ball tour. In total over the last 12 months I've been to Sunderland, Manchester, Hyde Park, Dublin,Wembley, Glasgow, Coventry, Belfast, and Cardiff.

For the past 2 months my life has been sleeping in hostels, getting up at crazy o clock to get into pit queues, not being able to afford to eat, hanging out with a crazy amount of straight white heterosexual men all wearing khaki coloured clothing, and of course Bruce.

I get a lot of stick because people with money love to tell people without money exactly what they should and shouldn't spend their money on. So when people say that I would be richer if I didn't do excessive things like follow Bruce around, I find it hard not to get angry. I am poor. In the words of the The Boss himself: "I got debts no honest man could pay." With bank loans, multiple credit card debt, on top of the standard overdraft and student loans, I struggle. So why do something so expensive? Well I sold off a lot of my belongings to do this. I sold about a third of my comic collection, plus clothes and bits and bobs. I also got myself into extra card debt because the post office were stupid enough to give me a new credit card about a month before tickets were announced. I also lived on a rich diet of noodles and beans on toast. I mean I lived on this diet before I even bought tickets, that's not really an option. That was totally my choice and I regret nothing. Even though these tour adventures are over, I am still paying for this now and no  doubt I will continue to pay this Bruce-induced debt for a good long while yet. Like I said, I regret nothing. When I love something, I love it hard.  Although I gotta say, fandom should never ever be measured by the stuff you can afford to do, I'm still a massive Bruce fan even if I never go see him live ever and I realise that this was an absolute luxury for me to do. But it was a costly luxury, meaning I am now in even more debt than I thought possible.

Here's my typical day at a Bruce show: I get up and get to the venue the day of the show approximately 7am sometimes earlier if I'm awake and excited, to get myself the all important pit number.

The pit number is written on your hand, the first 1000 people are allowed into the special pit directly in front of the stage meaning you get awesome views and you will be within a few metres of Bruce and the band. Queuing for the pit is hardcore, there's no guarantee you will get in as sometimes venues don't honour the fan run number system and can just let any of the general public into the pit at opening times (Manchester Ethiad stadium 2012, I'm talking to you). The first part of the day is just a series of roll calls every couple of hours meaning you can come and go as long as you have a number, then usually around 2pm, you are expected to stay in number order and wait for the all important wrist band which gives you entry to the pit. Then roughly around 4pm you are taken in before the general public come in at 5pm, and sometimes if you are really lucky Bruce comes out and does a special pre-show acoustic set before the doors open as a little treat for those that have been able to queue all day.

It's absolutely bonkers, I know. I could easily just get a seated ticket or stand in the general standing area, cut out a full day of queuing and probably still have a grand old time. But it's not the same, and so I put myself through it each time. It's knackering and draining. I've queued all day in torrential rain, thunderstorms, and hail before. This summer I queued in blisteringly hot heat. Whatever the weather, it's never usually fun, and you are left achey and tired before the show even starts.

I go see Bruce by myself because I'm a huge Bruce fan and I don't know anyone else that is. I feel envious when I see people in the queue who are their with friends, partners, or family members having a great time. I feel extra isolated and kinda lonely and very aware that just because I love Bruce doesn't mean I fit in with a lot of these people.

Here are the people I encounter:

People wearing a fucktonne of Khaki.

People with wristbands all down their arms as badges of honour for how many Bruce shows they have been to. Oh, you weren't at the 2nd night show at Gothenberg? Sucks to be you.


Male Bruce fans tend not to like me. I am young, kinda weird looking, and I am overly excitable and passionate. They don't like that and instantly play the game of testing my fandom by asking me how many shows I've been to, how many bootlegs I own, obscure band trivia etc.

Women Bruce fans tend to be much more accepting, they will chat to me on face value without testing my appreciation for Bruce's music, although they assume that I am there because I have the hotts for The Boss.

I happened to meet some quite lovely Bruce fans this time around, like the very nice woman from Bolton who gave me water when I passed out and wouldn't let security pull me out from the front of the pit yelling 'SHE'S BEEN HERE SINCE 6.30 THIS MORNING, YOU ARE TAKING HER NOWHERE!' And earlier this week I attended a screening of the documentary, Springsteen & I, a portrait of Springsteen fans which reminded me that some Springsteen fans are just downright lovely and earnest.


So why do I do this? Why do I spend crazy money that I don't have? Why do I spend 12 hours queuing in a day? Why do I spend all this time by myself feeling estranged and isolated? Because I love Bruce Springteen. I've written zines about why I love him, but the live experience is something different. Because my experience of being in the pit are completely different to when I'm at the back of the stadium. When I saw him perform Tenth Avenue Freeze-Out in tribute to Clarence Clemons last year, I was close enough to see the tears in his eyes. When the E-Street horns came out on to the platform, Jake's sax was literally in my face, I didn't need no speakers to hear it. And during Born to Run in Cardiff, I strummed Bruce's guitar during the breakdown and felt magical.

I have offical Bruce come-down blues today as I return to normal life and I find it even harder because I have nobody to talk to about this. People asked me how it was, I said it was ace, and that's the end of the conversation. Nobody wants to know if he performed the normal version of Prove it All Night or the '78 version, nobody has asked me which was my favourite song from the Tracks collection I heard live, and nobody wants to squee with me because he played Secret Garden in the encore in Leeds last night.

I thought about interacting with other Bruce fans online, but a quick scan of a discussion thread about Trayvon Martin on the Bruce forum made me realise that no, I do not want to interact. 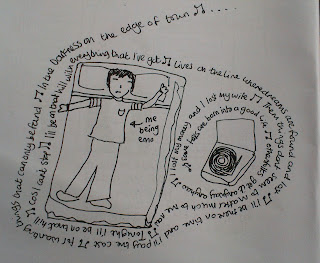