This is Seleena Laverne Daye: 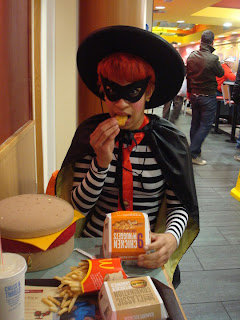 Creator of all my favourite zines from Sugar Paper to E.M.O to I Wear This On My Sleeve to lesser known zines like Kandy and the Casio Kids, and the short lived but utterly amazing The Day Bob...

I met Seleena when I was 15 back in 1999. I lived in Dewsbury in West Yorkshire. I was a weird shy kid and didn't have any friends. I wrote to teletext asking anyone who liked the band Bis to write to me so I could at least have some penpals. I then got this letter from a girl called Seleena. 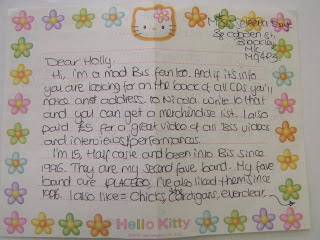 She seemed like the coolest person alive and so I started writing to her. We wrote letters to each other almost every week, sometimes every day at the height of our emo. In the school holidays and on weekends when I could afford it after saving up my not-even-minimum wage from my part time job at Shoe Fayre, I'd get a train and cross the pennines and go to Manchester to visit her. It was the first time I'd ever left Dewsbury by myself and it was exciting. When I first met Seleena I was super shy and quiet. Seleena is loud and exciting and it felt like a mancunian Rayanne Graff was shouting about Bis and Placebo in my face. I thought she was AWESOME and I was in AWE.

We stayed friends and somewhere along the road we started writing zines together. I started writing Angel Food which ran for a few issues and then started writing Go Lola. Seleena was a regular contributor and in fact my only readership for a few other zines that I made. She was the one that suggested writing a zine in a first place. Zines were our lives. After writing and drawing stuff for Angel Food we decided to put out a joint zine together, the short lived (but brilliant) 'The Day Bob...' - the title was a total teenage inside joke which nobody found funny except for us. I did't have time to write for 'The Day Bob' as well as my new zine 'Go Lola' so Seleena took on the zine as a solo writer and the rest is history. My zine output in comparison to Seleena's is pathetic, she's the most prolific zinester I know. As well as being the greatest maker of mix tapes the world has ever seen.

In 2001 we went to Ladyfest Glasgow together which was the most life changing weekend of our entire lives. We came back fully inspired and knew that we wanted to do something. After reading a super inspiring article in Kitty Magik zine, we formed the very first UK Radical Cheerleaders and performed the following year at Ladyfest London 2002. 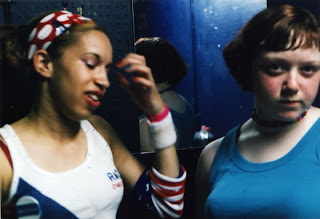 We were awesome. We then went on to play with all our favourite bands like The Gossip, Bis, Bangs, Motormark, Valerie, Blue Minkies, Velodrome 2000, Flamingo 50. We appeared on the Motormark album and put out our own radical cheerleading album as well as making radical cheerleading zines together.

I then started to make casio pop songs and started to play in bands like Smartypants, The Booklovers, Cooties Attack, Shrieking Shack Disco Gang etc and while I did this Seleena kept making zine and in the last 15 years she's written more zines than I know what to do with. As well as starting up her own craft shop making jewellery and accessories, while also making merchandise for the band Help She Can't Swim, and also setting up her very own sweet shop selling sweets and zines and her own creations. Oh and did I mention she's also an aritst?

Here she is at the opening of her exhibition earlier this year: 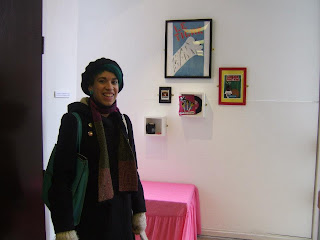 She makes felt pieces based on popular culture and her own imagination. I am in love with the art that she makes and I'm so excited for her upcoming exhibition with her new art collective Yiiikes. You can see more of her art and even buy some of her pieces here: 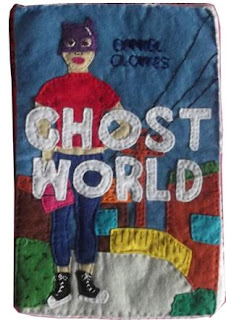 Seleena is the most fun ever, look at the time we got totally REAL scorpion neck tattoos on our trip to Legoland: 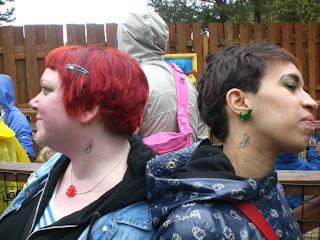 And how about the time I got a text message from Seleena saying 'I've just done something crazy' and it turns out she had booked us tickets to Morrisoncon in Vegas where this totally happened: 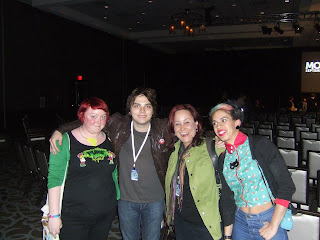 The reason why Seleena is my favourite zinester is that when I read her zines I can hear her voice. She doesn't buy into that fake academic bullshit, she writes as herself. She is genuinely smart and super funny and she is honest. Earlier this year she co-created the new zine Poor Lass with Em Ledger, a new zine focusing on class which is BRILLIANT and is easily zine of 2013. She is my hero, she is the best dancer I've ever seen, and most importantly there's no middle ground with her. She either properly loves things in a totally bonkers over the top amazing way. Or she hates it and wants it to fuck off and die.

While we don't live in the same city anymore I still get to see her for adventures and we still write to each other, although in long complicated emails about being working class and loving MCR rather than actual letters through the post. It's weird to think that we are both grown ups now and in the 14 years we've known each other we've just got more and more awesome. Our 15 year old selves would frikkin love us. I'm very lucky to know someone as awesome as Seleena, she is my total hero.

You  can buy Seleena's zines here  and read the blog she co-writes with fellow Sugar Paper zinester Kandy, here.