Today I got the most awesome zine through the post. 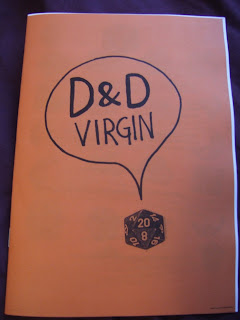 It's written by Emily Tulett who describes the first time she played d&d, how she got into it, why she loves it, and describes her recent d&d campaign with info about her character. 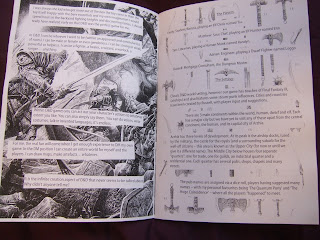 Emily is using her zine to document d&d and hopefully future issues will tell us more about her plans to become a DM (dungeon master). You can order it from Emily by emailing her: emilytulett@gmail.com

I had my first intro to d&d a few years ago through a local comics group that I used to attend. I went to a session where I was told how to make my own character and was given an overview of the game, but I found it boring and hard. I didn't know many of the people that were playing, I couldn't understand all the rules, and it seemed so complex and difficult that I never returned past my first session.

Last year a bunch of my friends who had never played d&d before decided they wanted to give it a go and we began to seek out a DM who would help guide a bunch of total newbies.

We wanted to play D&D for many reasons: we were broke and wanted some stay at home indoors type fun, we are geeks, we never stopped playing lets pretend in our heads, and the idea of being someone else, someone awesome and tough and kick-ass, sounded like the most fun ever. We knew nothing about d&d and hoped that wouldn't hold us back.

Luckily we knew someone who was mega experienced with RPGs and would DM a session for us. It was THE MOST FUN EVER! That first session lasted 8 hours and I honestly could have kept going. 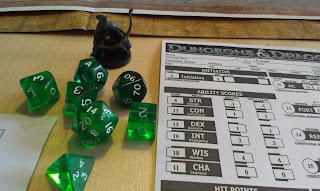 You roll dice to make decisions, either about your character skills, or about your actions, or about your attacks - the dice decide everything. You go on quests, you fight bad guys, and you try to stay alive basically. All you need is some dice and a pen and paper and yr good to go!

I think the reason why I like playing d&d so much is because you can't bullshit your way through it. There's no being cool in d&d. You have to totally immerse yourself in a world of make believe, you have to care about your characters and your quests, you have to be earnest otherwise it just doesn't work.

I also just love hanging out with my friends, eating all the food in the world and having the most epic adventures. The last time we played we fought a dragon for about 2 hours and I came away feeling so knackered and hyper as though I'd actually been beating the shit out of a dragon for real. Also our DM, Lloyd is amazing and prepares endless supplies of snacks and fizzy pop and sweets for us each time so we fight dragons while off our faces on e-numbers. 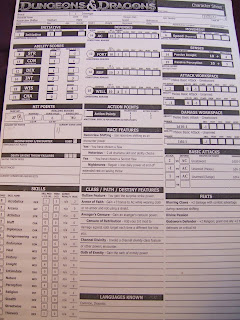 My character is called Bruce (obviously). We've just started a new session so my scores and my powers arent' that great yet, I need to go on way more quests and battle way more shit til I am fully awesome. But for now I'm a Razorclaw Shifter. I'm an Avenger. I'm pretty awesome at acrobats, perception, and religion. I'm terrible at intimidating people and diplomacy skills, but I can beat the shit out of a lot of things! I have cool utility powers like the Aspect of the Dancing Serpent which means I can take free actions at the end of my turns to do extra cool stuff, and I have cool magic items like the Brooch of No Regrets which means if a member of my group fails to roll something I can say 'halt, I have the Brooch of No Regrets' which allows them to roll again so we can totally go and kick ass.

I can't recommend d&d enough to people. I'm totally hooked, I just wish I could play it more as it often takes a lot of planning to get my d&d gang in the same room at the same time. Just get yourself some dice and read the D&D Player's Handbook. 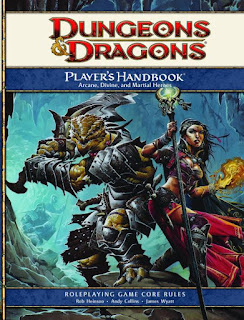 You can find this in most public libraries, it's super popular! Find a group of friends to play with, and find someone to be your DM and away you go. Also look out for local DM groups which you can join. Comic shops, game shops, and libraries often have games going on.

Email ThisBlogThis!Share to TwitterShare to FacebookShare to Pinterest
Labels: zines