The cinema says that my life will be alright

So it's the end of the LLGFF aka Queer Christmas and this week has been the BEST. I have festival fatigue though and although I'm sad because I don't get to watch queer films every single day now, I'm not going to miss paying too much money for drinks at the posh BFI bar. It's £6 for a pint of sausage rolls. I wish like hell there was a Greggs on Southbank.

This weekend has been super fun, super inspiring, super exciting, and super FUN! So here's the best of what I saw...

I've been so excited for the Divine documentary since the fundraising campaign was announced a few years ago and I wasn't disappointed,  I bloody loved this film! I loved seeing lots of the Dreamlanders talking, but I loved Divine's mum the most who accepted Divine later in life after a fall out, and I'm not gonna lie, I totally had a tear in my eye when she described hanging a 'welcome home Divine' banner outside the house. My only niggles were portraying Divine as a sad fatty insinuating an unhealthy/addictive sort of relationship to food discussing him as a kind of tragic figure, and  yet made nothing of the fact that Divine was totally having lots of fun hott sex with lots of fun hott sexy guys. Divine was a total legend and this film made me so happy!

She said boom: the story of Fifth Column

Argh I was so excited for this film! I love Fifth Column but I honestly knew NOTHING about them. This documnetary was awesome to see. It's a totally important part of feminist/queer music history and it was awesome to see how it related to the queercore scene and zine culture. G.B Jones is totally mesmorising and I felt super inspired after watching this. Also I was super psyched to see it screened with the amazing short film made by Fifth Column called The Yo-Yo Gang


It was worth it just to see this short super 8 film about rival gangs of yo-yo kids and skateboard kids. Best thing ever!!!

Queen of the Desert


Queen of the Desert is a half hour documentary originally shown on Australian ABC tv and shown at the LLGFF as part of the trans shorts selection. The documentary features Starlady, a super colourful and awesome translady who works with communities in central Australia, teaching young girls how to cut and style hair and trains them to run their own hair salons within their own communities. I was worried this was gonna be offensive but I really loved the way in the documentary and Starlady herself was so  respectful and informed and this warmed my cockles a little bit. I think this was definitely my favourite  of the films in the trans short films. Starlady is super inspiring especially when she's climbing hills to rescue some kids from a potential bush fire. Amazing! Watch this if you can!

What I love about being queer


One of the best positive and inspiring bits from the film fest was What I Love About Being Queer which is also a tumblr and a book project. The short film features a bunch of queers telling us why being queer is so frikkin awesome. While projects like It Gets Better videos tell you that being gay is awesome cuz you can be just like straight people now, WILABQ tells you that being queer is awesome because you are NOTHING like straight people! Some of the responses are brilliant and personal and political. People love being queer because it  links them to a wider sense of politics, because you get to decide what your own idea of sexuality and sex is, because fat bodies are desired within queer communities, and because queer sex is awesome. These were some of my personal favourites. Also I loved the audible gasp in the audience as a bunch of queers swooned over Tegan Quin who also appears in the film.

Film fest has been a blast. I've loved hanging out at the BFI every night with my friends and meeting new people, seeing people I haven't seen in ages, drinking overpriced beer, eating overpriced sausage rolls, and having my credit card declined because fim fest costs so much.

As well as all the ace films, I was also lucky enough to dj with some of the Bad Rep crew at the opening weekend of the film festival. Unfortunately DJ Froogs was unable to make it, but we played lots of Deftones in his absence, and we all partied super hard. It was mega fun making a dirty sweaty mosh pit in the posh bar at the BFI. There's nothing better than the sight of sweaty queers jumping up and down, screaming, shouting, and dancing to Marilyn Manson while some posh straight people tuck into a bowl of olives and a bottle of wine. It was hella fun! 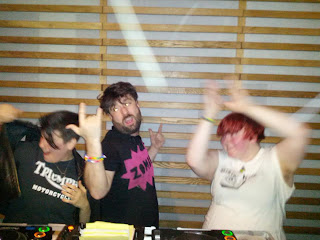 Film fest is always such a blast. I see films that I think 'WHAT THE HELL DID I JUST WATCH?' and I see films that make me go 'holy shit, that's everything that's been in my head on the screen!'. It's been amazing and validating and expensive and fun, and now roll on fringe fest!
Posted by Holly Casio at 18:48