Thank you for the venom : why it SUCKS to be a fan of things

Remember when you were a teenager and you lived inside your own head? You didn't have many friends and you had hundreds of posters on your walls and your life was just 24/7 obsession? Well I never grew up from that.

I have a completely obsessive personality. I find it hard to just 'like' things. I either love it or I hate it, it's all about obsession. I'm 29 and I still live in my own head. Bedroom dancing is my life. Music + zines + comics are my entire world. I never stopped caring, I never stopped being obsessive.

My first real band love was bis. I remember seeing them on Top of the Pops for the first time performing Kandy Pop and thinking what the fuck?

In the midst of all my california pop punk love, I fell in love with bis and I fell HARD. I met one of my best friends to this day via bis, I wrote zines about bis, I wrote letters to bis, I interviewed bis, I daydreamed of being in bis, I dressed like Manda from bis, I danced everyday to bis, I even said that Return to Central wasn't such a bad album, that's how much I loved bis.

And then one day they broke up. I woke up one morning to a text from my good friend Seleena telling me she had read on Teletext that bis had broken up and I cried for what seemed like a whole day. I was lucky enough to support bis on their final farewell tour. We played with them in Manchester for their final tour, and then I went to their 'final ever gig' (not knowing that in the 10 years to follow would be filled with lots of 'last ever FINAL' reunion type shows) at King Tut's in Glasgow, and I wept like a baby on the barrier after they left the stage for the final time. I was 21 at the time and I felt like my youth had ended, as the only surviving band from my teen years had abandoned me. I felt heartbroken. And I felt stupid for feeling heartbroken, because to be heartbroken about a band breaking up you have to be a mega fan, and being a mega fan means you aren't cool.

My name is Holly Casio, and I'm proud to be a fan.

'Fan' is a dirty word. People don't like fans because it's too earnest, it's not cool, and it's putting people on pedestals which goes against the whole diy punk ethos. I have to admit I have a hard time justifying it myself. Lets take my obsession with Bruce Springsteen - how the hell do I justify that. I'm a working class queer feminist, I have grown up steeped in riot grrrl punk and queer ideas. How on earth do I justify loving a white male heterosexual multimillionaire stadium rocker? That's kind of weird right?

But I love loving stuff. Being a fan isn't passive, it's productive and creative and fun as hell. As well as falling in love with things, I also make things too, no matter how small and silly. My stupid casio bedroom pop songs, my zines, my club nights, I made those, and I make those because I get inspiration from the bigger things I'm obsessed with.

I'm 29 now and most of my friends aren't fans of things, they can quite happily like things and be done with it, they don't go the whole crazy route of getting a Bruce Springsteen tattoo 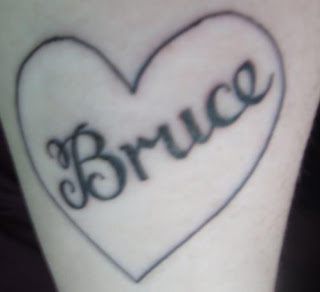 or camping out overnight for a Harry Potter premiere 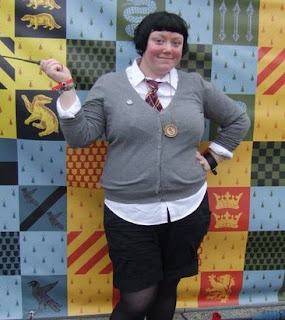 or getting into a scary amount of debt to fly across the world to attend a comic convention to meet Grant Morrison. 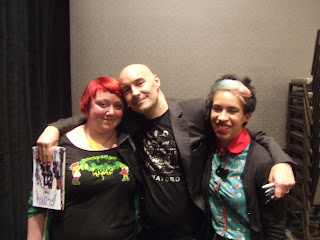 But I just can't help it.

I'm pretty heartbroken today because one of my most favourite bands in the world have broken up. I thought I was over feeling like this, but every now and then it will hit me hard when something I love or obsess over goes away or ends or dies or decides to call it quits. The way I felt when bis broke up, the way I felt when Clarence Clemons died, the way I felt when Dananananaykroyd broke up. I was utterly shocked at how sad I felt when these things happened, how on earth does pop culture have a hold of my life so much that it actually shakes me up when something I obsess over goes away? I feel pretty silly about it cuz I don't actually know these people, but they are important aspects of my life.

My Chemical Romance anounced that after 12 years they were breaking up today and I'm properly heartbroken. It's ridiculous right? I'm 29 and I love My Chemical Romance. YEAH, AND WHAT OF IT? That band have been my absolute world. Every single album has been perfectly timed to coincide when I needed something in my life but didn't know what. I believed in the mythology of 4 misfits against the world, of antiheroes, and losers, and survival. It meant the fucking world to me. I remember crying my way in to the video shoot for Planetary Go, I remember dislocating my shoulder at the Hammersmith show, I remember dressing up like killjoys with my friends for the World Contamination tour and feeling as excited and awesome as I did when I was 15. Cuz guess what? Being a fan is fucking fun as hell. It might not be cool, but it is AWESOME. 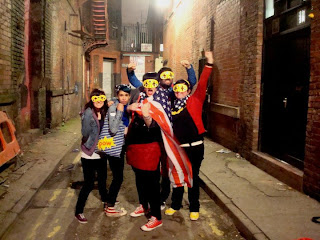 I'm in disbelief at the moment and it all feels a bit unreal. 12 years is a long time to love a band. I truly did love them. I thought I was over the whole obsession thing, I thought that intensity just belonged to being a teenager, but my complete and utter fan love for MCR over the years proved me wrong. I didn't love them ironically, they were my world. You know that whole 'MCR saved my life' stuff you hear and mock and laugh at? Yeah, well thats actually kind of applicable. I feel like MCR did save a part of me.

This is how I feel listening to MCR

I guess I can't properly explain how sad I am. My obsession is not your obsession, but it hurts and I think I'm in a state of shock and disbelief. I'm also kind of angry. That short cold goodbye statement was a paragraph of nothing. I've seen more earnest heartfelt blogs full of FEELINGS from members of MCR simply about what breakfast cereal they are eating or what they are watching on tv. So I expected a little more from them as they said goodbye to 12 years of brotherhood, friendship, and music rather than just a 'thanks and goodbye'. I wasn't ready to lose them just yet. I was getting excited for the new album that they had just started to record and while Conventional Weapons may not have been the amazing series of 7"s I was hoping for, it did include one of my all time favourite and most exciting of the new MCR songs, Ambulance.

Ordinarily when I'm having a bad day, I have a bedroom dance to this song and I swear it has magical healing properties and can fix me in a hot minute. The same way that I listen to It's not a Fashion Statement when I'm feeling angry, or Desert Song when I'm feeling down, or Famous Last Words when I feel like I want to show the world that I am awesome and nothing can break me. But today I don't really feel like listening to any of these songs.